I sometimes wonder about setting up a “climate hypocrite of the month” award.
Previous winners might include:

Anyway, December’s hypocrite of the month is Stefan Rahmstorf, RealClimate’s master of the misleading graph, who in his latest post has criticised a graph available as part of a “widget” at WattsUpWithThat:

Rahmstorf claims the graph is ‘deceptive’ because it plots monthly data. Perhaps he thinks throwing data away is a good idea. Perhaps he prefers the decadally averaged graph that Thomas Stocker and the IPCC are so keen on, that hides the warming slowdown so effectively.

Rahmstorf also says “One needs to scale the CO2 data correctly for an honest comparison with temperature, so that it can actually be used to evaluate climate scientists’ predictions of the CO2 effect.” Shub points out on twitter that this is circular reasoning – the graph has to scaled “correctly” to make it fit with Rahmstorf’s predetermined conclusion.

Another deceptive claim by Rahmstorf is that the data shown was “from several km up in the troposphere”. In fact the TLT data is strongly weighted to the near-surface atmosphere, with a peak in the weight function at about 2 km, so “several km” is misleading.

But the hypocrisy is that Rahmstorf is himself an expert in making misleading graphs. A good example is this from his Oct 1st blogpost: 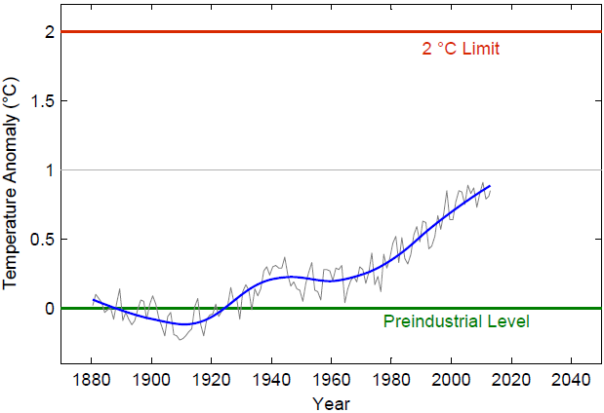 Notice how the blue line appears to continue upward while the data itself shows the well known pause in warming. Rahmstorf has been producing this sort of deceptive graph for years, since at least 2007, in papers and in a report for the Copenhagen conference in 2009, see Lucia’s “Fishy Odor” and “Source of fishy odor confirmed” posts from 2009. In that case, Rahmstorf extended the smoothing interval from that used in a previous paper, but did not change the description in the caption. What he had actually done had to be reverse engineered by the climate bloggers.
“Rahmsmoothing” has also been discussed several times at Climate Audit.
Another obvious deceptive aspect of Rahmstorf’s graph is the horizontal green line labelled “Preindustrial Level”, creating the impression that in “preindustrial” times the global average temperature was unchanging.

[ Historical note: I first started learning about climate science in about 2007/8, at which time I thought that climate science was fine but some stories in the press were over-hyped. A natural first port of call was the RealClimate blog run by Rahmstorf, Mann, Schmidt and colleagues (who at that time I had never heard of). I was quite shocked by the attitude displayed by these people in various ways, and I particularly recall the Rahmstorf smoothing. It makes no sense to continue a smoothed graph up to the end of the raw data, and even if you do that, you should explain how you did it. This was bad enough, but Rahmstorf went a step further, failing to explain even when asked. This kind of behaviour from Rahmstorf and his team was a significant formative factor in my views on climate science. This comment posted yesterday on the deceptive graph thread summarises the RealClimate problem well and shows that five years later they have learnt nothing from their earlier mistakes. More on that story later. ]

There are now two three more responses to Rahmstorf, from Bob Tisdale at WUWT, Mike Haseler at Scottish Sceptic, and Lubos Motl
And there’s another nice comment from Steve Harris at RealClimate.
Shub has a blogpost on the Realclimate effect.

New devastating evidence of the horrifyingly rapid pace of global warming has climate scientists and their hangers-on in a frenzy of hysteria. Although 2014 is not yet over, the Met Office has issued a Press Release saying that according to the HADCRUT4 system devised by Phil Jones and his friends, 2014 looks like it is on course to be 0.57C above the long term average, smashing the record of 0.56C set in 2010. If correct, that’s a massive increase, 0.01C of warming in just 4 years. If warming continues at this rate, the world could face a catastrophic temperature rise of 0.25C over the course of this century.

The terrifying news is reported by the WMO, Carbon Brief, and of course the BBC, who seem to think that the extra 0.01C will lead to an increase of cars rusting in ponds.
The Independent says that the 0.01C of warming has got the daffodils confused, while Paul Hudson says at his BBC blog that climate sceptics are “feeling the heat”.

Meanwhile, here is the latest graph of the temperature of the lower troposphere according to the RSS satellite system, with the thin green lines showing 33 IPCC climate models for comparison: 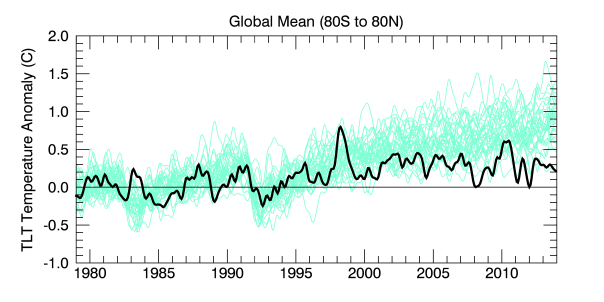 Suffer the Little Children to Come Unto Green

The BBC Gets Creative