The Royal Society, formerly a highly regarded institution, is increasingly abandoning science in favour of political propaganda.  Its latest piece of scaremongering, Resilience to extreme weather, is packed full of emotive images of floods

(there are at least 4 such meaningless diagrams) but contains virtually no science.

In the introduction, Paul Nurse claims that “By presenting evidence of trends in extreme weather and the different ways resilience can be built to it, we hope this report will galvanise action by local and national governments…”.
But unfortunately Nurse and his chums seem to have forgotten to include any evidence of trends in extreme weather. All we get is examples and anecdotes. Throughout the entire 100+ page report, there is not a single graph showing past trends in extreme events (there are plenty showing the results of speculative computer models for the future).

Graphs of UK rainfall are often shown at Paul Homewood’s blog, for example in his recent post Rainfall Patterns In The South West, relevant to the Somerset flooding, where it can be seen that there is no trend in rainfall and the wettest month occurred in 1929. I wonder why no such graphs are shown in the Royal Society report?

Similarly there is no data provided in the report on hurricanes and typhoons, despite there being a suitable figure on this in IPCC AR5 WG1 Chapter 2: 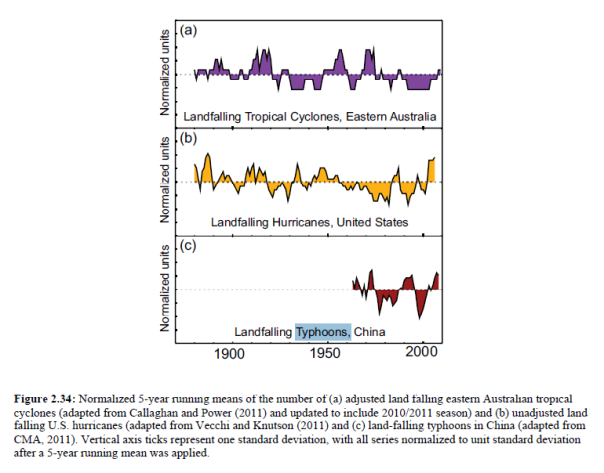 Hurricane Sandy is mentioned several times in the report, but there is no mention of the current record-breaking lull in hurricane activity.

Tucked away in the middle of the report are the distinctly un-alarming remarks from the IPCC SREX (2012), such as “Low confidence that anthropogenic warming has affected the magnitude or frequency of floods at a global scale”.

Roger Pielke has a useful summary of what the IPCC AR5 had to say about extreme events. He ends with “Of course, I have no doubts that claims will still be made associating floods, drought, hurricanes and tornadoes with human-caused climate change — Zombie science…” I wonder what he would make of this report by the Royal Society?

On P.109 of the report we are told that it was reviewed by a panel of eight experts before being accepted by the Royal Society. So it is curious that amateur blogger Andrew Montford managed to find a basic error in it so quickly. Maybe they should employ him in future to check their reports for errors?

14 thoughts on “Has the Royal Society abandoned science?”