As I’ve mentioned before, I really try to ignore the Lewandowsky nonsense, but  occasionally  an opportunity comes up that’s too good to miss. In The Conversation this week there’s an article “Are you a poor logician? Logically, you might never know” by Stephan Lewandowsky and Richard Pancost. Yes, Lewandowsky, the Chair of Cognitive Psychology at University of Bristol, who writes papers on his pre-determined conclusions without apparently noticing that his data doesn’t support them, has written an article about people who aren’t very good at thinking logically, and who over-rate their own competence; the article goes on to stress the importance of “introducing accurate scientific knowledge into public debates”. Honestly, I’m not making this up. 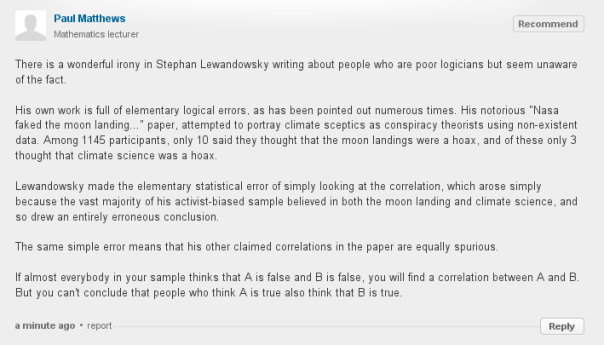 Lewandowsky’s logical blunder has been reported on numerous occasions, by Steve McIntyre here, here and here, by ManicBeanCounter, by Jose Duarte and by Brandon Shollenberger, who showed how Lewandowskyan logic can be used to show that people who are concerned about climate change are pedophiles. Here is Brandon’s plot of Lewandowsky’s data, which nicely illustrates the error (small random numbers have been added to the responses so that they show up individually): 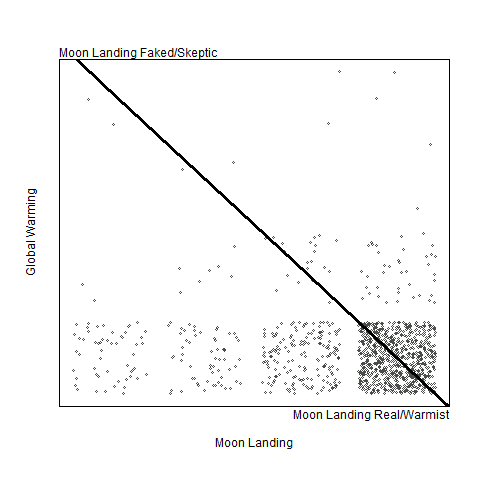 This is the data that Lewandowsky used to justify his notorious paper “NASA faked the moon landing—therefore, (climate) science is a hoax”. Despite the obvious errors, and calls for retraction, the journal Psychological Science has so far stubbornly refused to take any action.

After the section on logical thinking and the Dunning-Kruger effect, of which Lewandowsky himself is such a fine example, the remainder of the Lewandowsky-Pancost article sinks further. There is an unfair personal attack on Anthony Watts, saying that he thinks hot buildings contribute to warming, when in fact, as the authors are well aware, his concern has been with the poor siting of weather stations. Then there is the false analogy of smoking causing lung cancer – at the risk of stating the obvious, tens of thousands of people die every year from lung cancer, almost all of them smokers, so the link is perfectly clear, unlike the claims about future warming based on speculative computer models that are increasingly failing to match reality.

My comment was deleted by the Conversation’s moderators, and I received an email giving their guidelines – none of which were broken by comment. It can’t really be seen as off-topic, since it’s about logical thinking, and there are other comments that are much more off-topic that survived. Presumably the excuse would be that pointing out Lewandowsky’s errors counts as a “personal attack” – though he himself is allowed to attack Anthony Watts. (My comment survives at this blog where the article is copied). Several other comments were deleted and the comment thread was rapidly closed.

A future post will deal more specifically with the so-called Conversation, its censorship of comments, its abuse of public funding, and its bogus claims of “Academic rigour” and being “free of political bias”.

Ben Pile has an article on Lewandowsky’s Logic and what he aptly terms the “Nonversation”. He also notes the failure of the academic community to act as a check, and how this then reflects badly on the entire field.

Ben links to a series of three recent posts at by Andy West at WUWT. One of Andy’s main points is that Lewandowsky, and the climate movement generally is a prime example of the cognitive bias failings that he accuses others of – similar to the point I am making here.

Brandon Shollenberger reminds me that he wrote a longer document on the statistical error.

Finally, the LiveFromGolgafrincham blog has been fortunate to procure a special guest post from the man himself, in which he explains that the latest Conversation article was in fact intended to be a humorous parody, which makes a lot of sense.

Another own goal by Lewandowsky appeared yesterday. A short, content-free opinion piece by him was published by IOP (have they forgotten what the P stands for?). It is the latest instalment in his “every-one-who-disagrees-with-me-is-a-conspiracy-theorist” canon. His paper draws attention to climategate, by claiming that sceptic blogs show a “continued and growing fascination” with it.
Yet again, the man exposes his clueless lack of self-awareness.
Needless to say, Lewandowsky’s claim of “continued and growing” sceptic fascination is nonsense. The above link shows that Climate Audit has had one article on Climategate in 2014, none in 2013 , and one in 2012. The much more active WUWT blog has had 4 in 2014, 2 in 2013, 16 in 2012, and 22 in Nov-Dec alone in 2011, following Climategate 2. Maybe someone can do a more thorough investigation?
ATROSTO again, it is he, by publishing this inane article, who exhibits “continued and growing fascination”, and “continued conspiratory obsession”.

As Judith Curry wrote on twitter, “New paper by Lewandowsky once again projects his own conspiracy ideation onto skeptics”.

In her latest blog post, We are all confident idiots, she writes “Lew is so busy dissecting the ‘bias’ of climate change skeptics that he misses his own rather glaring biases.”

Climate Science and the Rise and Fall of Evidence

From ‘Angry Penguins’ to an Unquestioned ‘Emu’