Dan Kahan from Yale University is currently visiting the UK and gave a talk at the University of Nottingham yesterday.  He’s well known for his work on risk perception and in particular the idea of “Cultural cognition”, on which he runs an active blog.  He has already posted up his overview of the talk, and the slides he used.

For those who have looked at his blog and his papers, the theme of the talk was quite familiar, but I found being present at the talk made things a lot clearer. He’s a very enthusiastic and energetic speaker, moving around the room, right up to the audience (he returns the compliment by describing Nottingham as “vibrant and bustling”).

He started with some remarks on the privilege of academic freedom, and then showed a graph of the strong left-right split on the assessment of climate change risk (which apparently gives much the same result for all climate-related questions).

He talked about the “public irrationality thesis”, the idea that the public tends to think quickly and emotionally, rather than slowly and logically as scientists do. If this was correct, then you’d expect public opinion to agree more with mainstream climate science opinion as science literacy and numeracy increased; but in fact this is not the case – there is a (very slight) negative correlation between climate change concern and science literacy (a result that was jumped on with delight by some climate sceptics).

His alternative hypothesis is “cultural cognition” – that there is a correlation with the individual’s way of thinking, in particular where they fit in a two-dimensional grid with hierarchist <-> egalitarian on one axis and individualist <-> communitarian on the other. In this diagram, people in the egalitarian, communitarian quadrant are more concerned about climate change, while those in the  hierarchist, individualistic corner are less concerned.

He was refreshingly non-partisan – emphasizing that it’s not a question of right and wrong or “pro-science” and “anti-science”, illustrating this with the case of nuclear power, which is the opposite way round in terms of agreement/disagreement with the mainstream scientific assessment. He also pointed out that most other issues don’t show such a divide, including water fluoridation and even GMOs.

There was a lot more in the talk – see his blog write-up – and it seemed he could have gone on for much longer if he hadn’t run out of time.

Of course it would be quite easy to question a lot of this. His results are from the US, and there is an impression that the partisan divide is less clear in the UK. What about people in the egalitarian individualist corner? Does it make sense to regard individualists as behaving as a group anyway? What about the various high-profile climate sceptics who have changed their minds, such as Anthony Watts and Patrick Moore?

A few days after his talk at Nottingham, Dan Kahan gave a similar but not identical talk at Cardiff. In his blog post on this talk, he includes an interesting figure that he didn’t show in the Nottingham talk:

This shows the cultural cognition effect: the HI group tend to be less concerned about climate change, while the CE group are more concerned. But it also shows that the CC effect is much stronger in the CE people than in the HIs: the green graph is more skewed to the right than the black graph is to the left. This relates to my question above – individualists are, more or less by definition, less inclined towards group-like behaviour than communitarians.

From another Kahan talk on the web, here’s a graph that shows the difference between the two groups even more clearly: 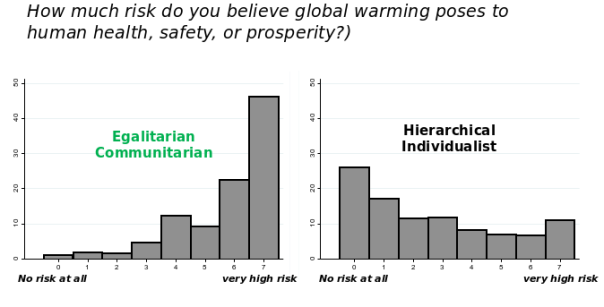